Get fresh music recommendations delivered to your inbox every Friday.
We've updated our Terms of Use. You can review the changes here.

CUT UP AND DRIVE 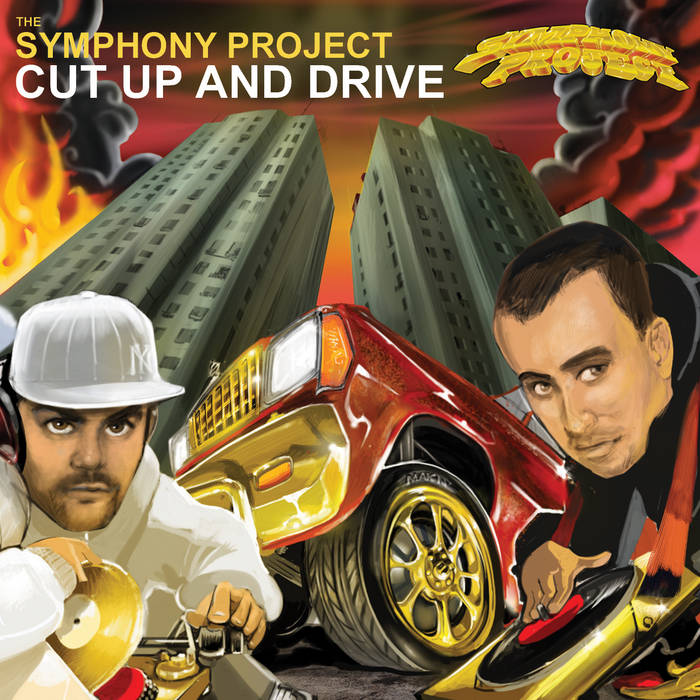 “CUT UP AND DRIVE pushes the limits of what a hip hop mixtape can be.” — Onion magazine

A 24 track mix CD, CUT UP AND DRIVE features exclusive tracks, hosting and special appearances from some of the foremost underground hip hop artists in the US and Australia including Purpose, Red Cafe, Smacktalk, 3to2, Hilltop Hoods, Headstrong Company & Australian DMC Champion DJ BTWO.

Ten years in the making, recorded over two months, The Symphony Project’s ‘Cut Up & Drive’ pushes the limits of what a hip hop mix-tape can be.

Adelaide’s own DJ Next and DJ Sum-1 have paid their dues behind the decks.

“Influenced by movies like Beat Street, I started out making pause tapes, then getting turntables and learning to scratch,” Next reveals. “We both competed for several years in the DMC/ITF competition circuit. I’ve played the club circuit for years too as well as DJing for groups and releasing mix-tapes/albums. I’ve just always done my thing and had fun doing it. It’s never been about the money. And back in the day, for the most part, there was no money in it!”

Sum-1 adds, “We were both bedroom scratch heads for years before anyone knew who we were.”

Next and Sum-1 take turntablism very seriously. “I have found a persistent feedback loop in my studio at home that I just can’t track down. It may be extraterrestrials,” Next speculates. “More like the dead trying to communicate than aliens,” Sum-1 reasons.

Career highlights? For Sum-1, winning the ‘98 ITF Aust/NZ title then placing 5th in the Amsterdam world final stands out. For Next, “recording my first ever album with the Hilltop Hoods and releasing it on vinyl and cassette only. Winning my first DMC competition in ‘96 and placing 2nd in the nationals. Being put on as a resident at the Indo when I lived in London. And I have to say, all these years later, this new tape is certainly one of my proudest achievements. Returning to Australia and reuniting with my long-time partner and banging out another tape. For me, there’s nothing better.”

“We really went all out on this one,” Next declares. “We wanted to make it more than your average mix-tape.”

The blend of Australian and US artists as well as their own productions and turntablist mash-ups make it a complete package.
It is also yet another example of why Adelaide has such a good name when it comes to quality hip hop.

“Purpose and Headstrong Company both have exclusive new tracks on there. Hilltop Hoods have a track on there. Funkwig of F&D/Social Change did a beat for us. And of course both of us are originally from Adelaide.”

THE SYMPHONY PROJECT is a turntablist/DJ crew consisting of DJs Next & Sum-1.

THE SYMPHONY PROJECT was formerly known as THE BEATS CREW and formed by Next & Sum-1 in 1997.

CUT UP AND DRIVE was the first of the Symphony Project's now numerous international collaborations, featuring tracks, hosting and special appearances by artists from both the United States and Australia.

CUT UP AND DRIVE is the first Symphony Project title released via a national distribution and retail agreement, made possible by Australia's largest and premier hip hop label, Obese Records Distribution.

CUT UP AND DRIVE had two separate tracks written especially for it - 'Who the Fuck?' by Smacktalk and 'The Symphony Project' by 3to2.

CUT UP AND DRIVE was the first release by Next & Sum-1 under the name 'The Symphony Project' and their first joint-release in ten years.

The name 'THE SYMPHONY PROJECT' was derived from Next & Sum-1's first joint-release mix-tape 'The Symphony' and originally referred to a live set they'd developed (their "project"). The name was later adopted as the group name.

BOTH originally from Adelaide, CUT UP AND DRIVE was recorded and produced in Melbourne, Australia where both DJs lived at the time.

Bandcamp Daily  your guide to the world of Bandcamp